How to Snag an Affordable, Cute City Bike and Sport Chek Giveaway

How to Snag an Affordable, Cute City Bike and Sport Chek Giveaway 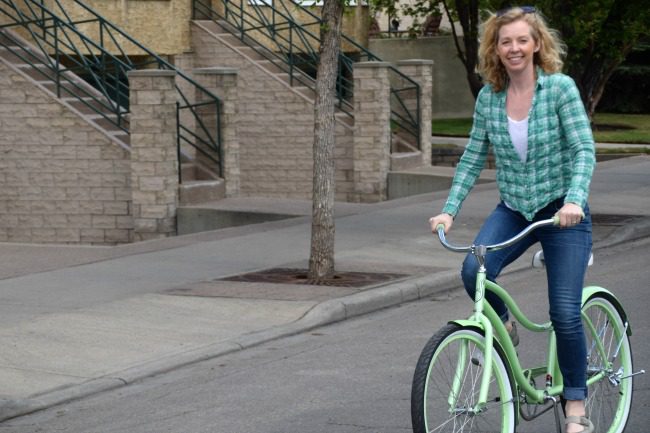 Check out my sweet ride.

Those who know me, know I’m in love with the city bike. I almost feel like I was one of the original hipsters (sans thick eyewear) when I would cruise around the inner city on my beloved Schwinn circa 2002. So when my bike was stolen from our yard last summer, I was devastated. Immediately after the theft, I began searching for another cool cruiser.

What to look for in a city bike

It needed to have:

I was hooped. Online searches produced dismal results, and the bike stores only carried models in the $400-$700 range. Way. Too. Much. Hope flickered when I saw IKEA getting in the game.

Upon closer inspection I realized that despite an attractive price point, the Sladda wouldn’t be the bike for me. First of all, it’s ugly. Second, like almost everything from IKEA, you have to assemble it yourself. Adding all the bells and whistles really jacks up the price, too.

Then came Mother’s Day and I became the luckiest mama in the land. Behold what awaited me when I opened my eyes:

Ticking all the right boxes.

Eve and her dad had been scoping out the bikes from Sport Chek for a few weeks. The Huz suspected I’d be enamoured by the pretty pale yellow and cool mint green cruisers they stock. When the price on Sims Charm went down to $150 (regular $229) the week before Mother’s Day, they struck.

Though we’re in the early stage of our relationship, I’m smitten with Minty (my new Sport Chek bike, yo!). Her seat is the comfiest bike seat I’ve ever sat on. Her fenders, oh, her fenders! They’re so stylish, as are the rims.

She doesn’t come with gears and with all my addiction to spinning, I was worried this was going to be an issue for us. Surprisingly, it’s not. She goes plenty fast and to be honest, I’m a bit weirded out by how it hasn’t crossed my mind to switch gears.

It only needs a basket. And a bell.

The only sore spot in our relationship was Minty’s chain fell off a few times on day two. I rolled her into Sport Chek, where their Service Shop had a looksy. Until then I had no idea there was a service area in the store that builds your bike for free (if you purchased online – store bikes are already assembled), plus does minor tune ups, brake and gear adjustments.

Turns out Minty was born with a chain defect, so the dude quickly put on a new one for me and away I went. I haven’t looked back since.

Thank you, Sport Chek for offering one lucky Travels with Baggage reader a chance to get all sporty this summer.