This Highclere Castle tour is better than Downton Abbey

Ask me to describe my perfect day and it would likely involve shopping, chatting with royalty, dressing up in fancy clothes, swilling champagne and tucking into afternoon tea. You can imagine my delight when I had the opportunity to do all this and more when visiting Highclere Castle, the real-life home of Downton Abbey.

When you’ve got a castle as your backdrop, how can you not pose?

As a jaded travel writer, few experiences live up to my expectations. Reader, my Highclere Castle tour exceeded them! If you’re lucky, your bus or taxi driver will begin playing the Downton Abbey theme song as you wind your way along the entry road framed by stately lime and beech trees. It’s just as much of a goosebump moment as the castle tour is!

When it comes into view, Highclere Castle is just as stunning as you see on screen. Perhaps more. Situated smack-dab in middle of 1000-acres of parkland, the castle emits an 18th century sense of grandeur. It doesn’t get more regal than this.

Well, there is Buckingham and Balmoral come to think of it, but let’s get real. This tour is as close as you and I will likely ever get to swanning about a legit castle. Visit in spring to see the gorgeous fields of British bluebells.

The Saloon is rich and opulent and where both the Crawleys and the Carnarvon’s (the real life owners) put up their Christmas tree.

The Highclere Castle tour takes you through the most opulent rooms in the house – many of which were used in the filming of Downton Abbey. You’ll likely begin your tour in the Saloon, a magnificent gothic-style hall lined with 17th century wall coverings made of leather, brought back from some grand tour of Spain no doubt.

With its stone arches, crests and coats of arms, the Saloon takes one back to the age of chivalry and even the Crusades.

From the Saloon, you’ll easily spot the magnificent, intricately carved oak staircase which leads you to the first floor bedrooms used in Downton Abbey. There’s the Mercia room, which is used as Cora’s bedroom. It’s kitted out with a fireplace and four poster canopied bed.

Who remembers what Mary got up to in this bedroom?

Next is the Stanhope bedroom which vibes like a sexy boudoir thanks to its rich red carpet and scarlet silk walls. This is the room where Mary’s love interest Turkish diplomat Kemal Pamuk stayed (and died!) in.

Between the bedrooms (you’ll also see Lady Edith’s and Sybil’s) the hallways are filled with black and white photos of the Earl and Lady Carnavon’s ancestors on grand tours throughout the world. Oh, to live that life!

You can’t stay in these rooms, but you can rent cottages on their property. Another charming place to stay in the bucolic countryside is in the Cotswolds at Cable Cottage. It’s just perfect for families!

Downstairs, the Downton Abbey House, AKA Highclere Castle is smothered in centuries of antiques and treasures from around the world. The North Library – probably the most recognizable room from Downton Abbey – is decked out in red and gold, apparently just like the Reform Club in London, should you be a private club aficionado.

In this house, you can’t sit on those iconic scarlet sofa’s (larger than they look on TV), but you can admire the 5,000+ books in the library, many of which date back to 16th century. Be sure to take in the framed pictures of the Queen and other members of the royal family displayed in the library.

Easily the most recognizable room from Downton Abbey, this is the spot for drinks and conservation.

Another room of note in the house errr castle is the dining room. You’ll probably never come this close to a Van Dyke original again, and his portrait of Charles I on horseback is nothing short of impressive.

You’re not allowed to take photos inside Highclere Castle, but Lady Carnarvon graciously offered up a pic for our media group.

Do you remember on Downton Abbey when the ladies would retire to a pale green, silk-lined Drawing Room after dinner? It’s just as swish as you’d expect with a full size concert grand piano and massive chandelier imported from Bohemia (now the Czech Republic).

That chandelier came from Bohemia in the early part of the last century.

If you’re as much of a fan of Downton Abbey as I am, you’re surely counting down the days until the movie premiers on September 20, 2019. Her ladyship didn’t disclose which rooms in Highclere Castle were used in the filming of the Downton movie, but from the trailer, you can see that the usual suspects are back in play.

Because of the hype surrounding the movie, there are many more events besides guided tours happening at Highclere Castle over the upcoming months.

You could tie your visit in with a summer show hosted by Mr. Carson! Or, attend a 1920s themed bash at Highclere Castle. Admission to Highclere Castle events and weekend tours often sell out, so you’ll want to secure tickets as fast as you can.

With Lady Carnarvon in the gift shop.

Before you leave the castle, make sure you pick up some souvenirs from their well stocked gift shop. I nabbed a lovely cake knife, Downton Abbey fridge magnets and a some of His Lordship’s chutney. Too cute! Highclere Castle now sells their own line of gin, too!

Lady C looks lovingly at their new line of gin. 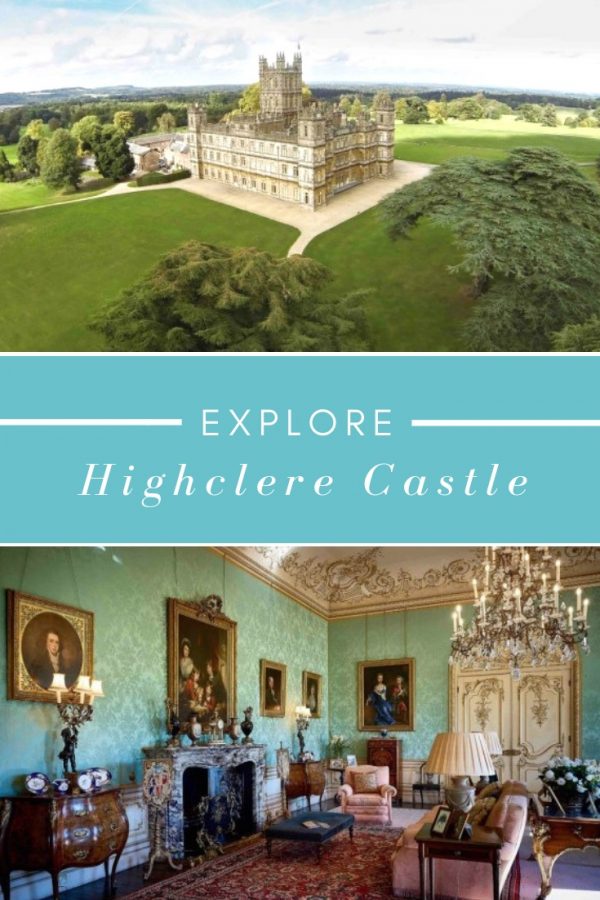 Have you ever done a tour of Highclere Castle? If not, would you like to?

Inside the Castle in the Rockies