Why you may need to see a kid’s eye doctor

Why you may need to see a kid’s eye doctor

Do you know how well your can child see? We didn’t. That was before we had a little kid with glasses. Here’s our story of going to a kid’s eye doctor for the first time.

How adorable is this kid?

Just like you’d see a paediatrician, it’s important to take your child to a kid’s eye doctor. Each year, fewer than 20% of Albertan children under six-years has a comprehensive eye exam before entering school, despite the fact that an estimated one in four has a vision problem.

Before they start reading, it can be really hard to know if your child needs glasses. Many kids struggle in school (preschool, too) just because they can’t see the whiteboard or focus on their workbook page. Confidence is everything with kids, so seeing a kid’s eye doctor is one way of setting them up for success.

Why you need to be examining children’s eyes at birth

Our daughter Eve was born with a blocked tear duct. This is pretty normal and it usually resolves itself after a few months. If it doesn’t, you need to have a procedure done to unblock it. The problem was, we were moving to England and her eye didn’t look like it was getting any better.

Wait times in England are long, so we wanted to get this sorted before moving. We got Eve into an optometrist when she was about six months old. Little did we know the Alberta Association of Optometrists (AAO) recommends all children across the province receive their first eye exam at six months of age; their second, by the age of three; their third, before starting kindergarten.

After that, it should be done every year after starting school. We’re now on this schedule and my daughter’s prescription seems to change every year. I get mine checked at the same time, but our insurance only covers adult exams every second year.

Turns out, our daughter’s blocked duct did resolve itself by the time we saw the optometrist, so off to England we went. Returning back to Canada when Eve was three, we went back for another checkup, just because it seemed like the right thing to do. I had no idea this was the recommended time and truth be told, it was my husband who made the appointment and took her.

We didn’t go to a specialized children’s optometrist. But our eye doctor’s practice is pretty focused of families. Because our optometrist (same one) had a record of Eve’s eyes when she was a baby, he was able to track her growth and make comparisons that otherwise wouldn’t have been possible. So relieved we had this documented history!

It was apparent she had astigmatism, which essentially means her vision is blurred and she needs to wear glasses – all the time.

Believe it or not, we haven’t lost or broken a pair of glasses yet!

The aha moment after visiting a kid’s eye doctor

Truthfully, I’m glad I wasn’t there to receive the news or watch her try on glasses for the first time. According to my husband, it was transformative. Her face lit up as she was able to see objects clearly for the first time in her life.

Something as simple as taking her to the zoo became dramatically different. Who knew she couldn’t see any animal that wasn’t within a few feet? To this day, I’m thankful for that blocked tear duct. It got on us on the right path of seeing an optometrist regularly.

All Alberta children are covered to receive an annual eye exam and kindergarten aged children can get free glasses if they need them through the Eye See … Eye Learn® program, which is offered by Alberta Health and the Alberta Association of Optometrists.

If you haven’t had your kids examined yet, this is a great time to ensure vision problems aren’t preventing your kids from reaching their full potential. We took advantage of this program to get Eve another set of glasses in case she lost or broke a pair (which of course happened). 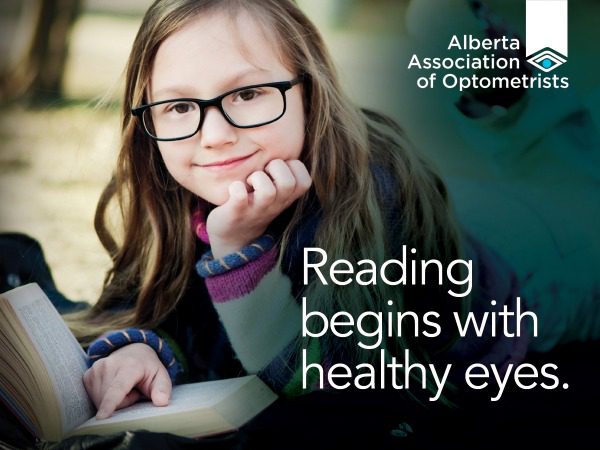 You’ll notice a huge bump in kids getting glasses right after Kindergarten starts.

On an average year (in Alberta) 20,000 kindergarteners get tested and 10% of them need glasses. To me, that’s a lot and I wonder how many more kids out there need glasses, but haven’t yet been tested?

While I’m not sure about other provinces, Alberta Health Care covers the cost for annual eye exams for Alberta children and teens up to age 19. I’d encourage everyone who hasn’t had their children’s eyes examined to make an appointment. Free eye exams for children are just a phone call away.

What regular checkups do you take your children to? Have you had their eyes examined by an optometrist?