There was a major dilemma going on in our house over the holidays. My daughter wanted to have the exact same birthday party as last year. Same guest list, same cake, same theme, you get the picture.

And what’s a kiddie party without balloons? Lame, that’s what.

Not that this was a huge deal, but we planned on taking the party out of the house this year. The kids are getting bigger, more are being invited and there’s only so many times you can play pass the parcel, hot potato, pin the tail on the donkey and treasure hunt for gift bags. Thing is, my kid just loves all those old fashioned party games. So far we’ve successfully avoided hosting a blowout party. You know, the kind where the kids get a lesson or some sort of entertainment provided by a pedophile, in addition to cake in the cell-like party room. 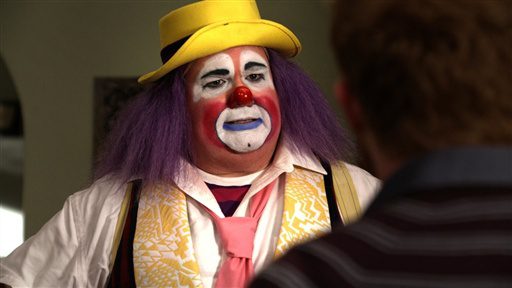 You don’t have to go full on scary clown, but having an adult (they know) dress up can be a hoot.

While hosting home parties was a purposeful decision when she was younger, at some point you’ve gotta mix things up. While I’m somewhat happy I haven’t yet had the pleasure of shelling out major bucks for bad pizza and toting a laundry baskets of gifts back to the car; I  was actually looking forward to driving an excited Eve to the destination and decorating the inmate room. Alright, if I’m being honest, I was super excited at the prospect of not cleaning up after ten ankle-biters.

Popcorn cake is made just like Rice Krispie squares, but popcorn is swapped for the cereal and jujubes or other candy are added in.

Since it’s her big day and all, we graciously decide to let Eve decide on the party format. And so, for the second year in a row, I made a popcorn cake, brought out the projector for a big-screen movie and bought mass-produced, likely leaded trinkets from the dollar store. All her beloved old fashioned party games were played. There were balloons and luckily I had the foresight to read up on the best balloon games for kids.

Eve thought her party was the best ever, but I’m still picking out pieces of marshmallowy popcorn imbedded in the couch. And the carpet. Oh, and the fireplace grate. (You tear the popcorn cake apart with your hands, which makes it oh-so appealing to the kiddies, but a nightmare for cleaners).

What about you? Do you like to host your child’s birthday at home?