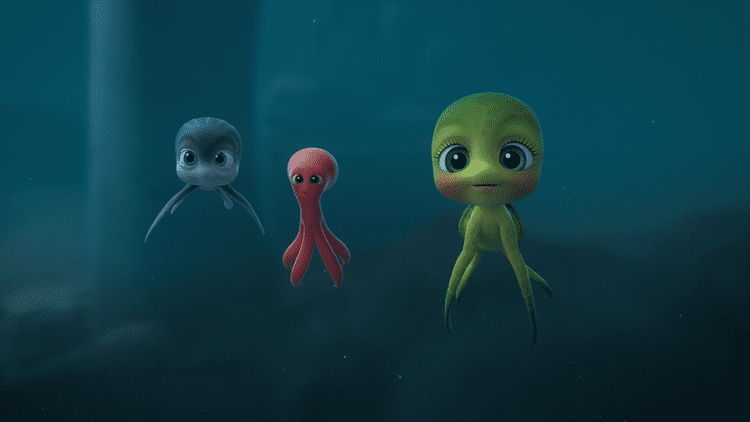 When you cancel your cable TV as we have, you tend to rely on high quality movies for your child’s screen time. We recently dove into  A Turtle’s Tale 2 – Sammy Escapes From Paradise, which released on DVD July 9, 2013. 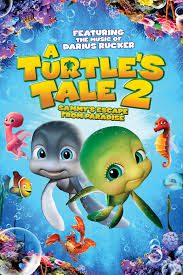 Would you buy the DVD?

To make our movie night more special, we invited over six friends, aged 4 to 9 to preview the G-rated flick that’s targeted towards kids 3 to 10 years. 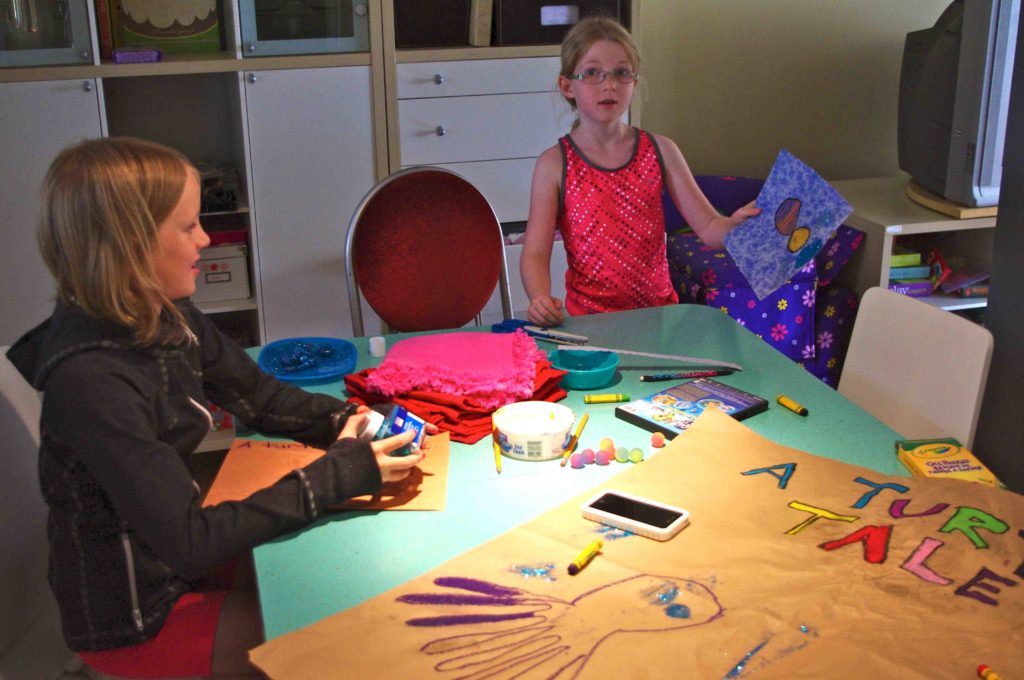 First we had to design the Step and Repeat – you know, the backdrop that celebrities stand in front of to have their pictures taken. The girls, however, lost interest in designing the large banner and decided to make their own. 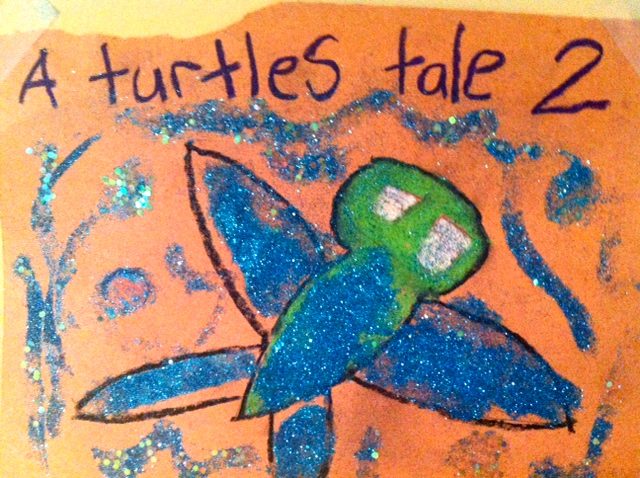 I should make my kid do movie crafts before every flick.

Once our special guests arrived they had their picture taken at the step and repeat, just as real celebrities would. 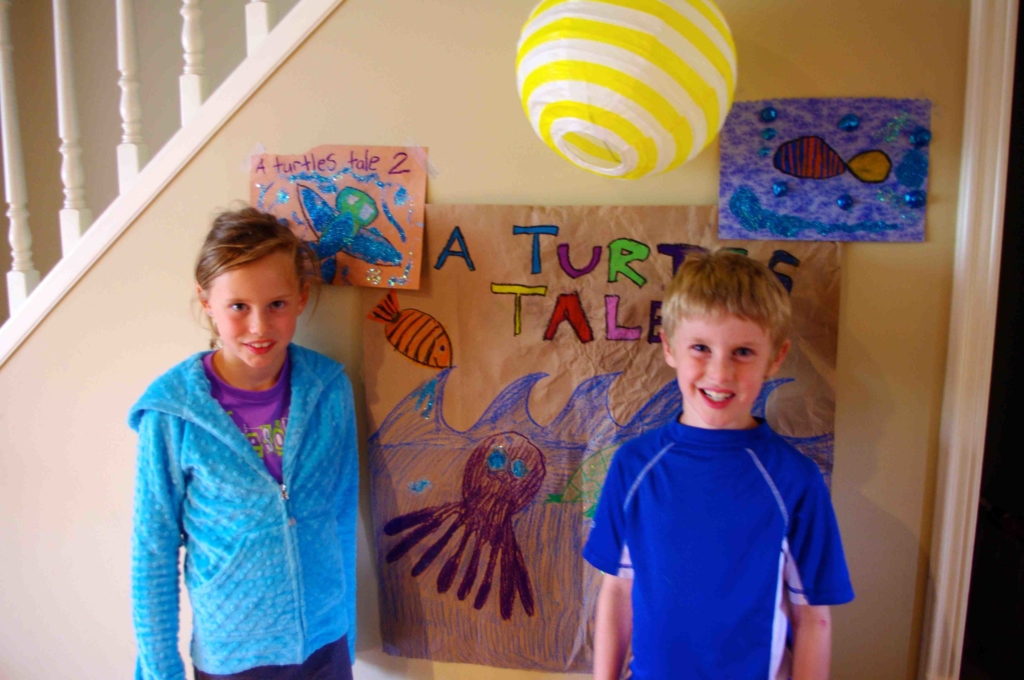 After pictures, we dined on salmon sushi rolls and pizza. I’d like to say I set out bowls of chips, snacks, and cute popcorn containers to keep things tidy, but I forgot. 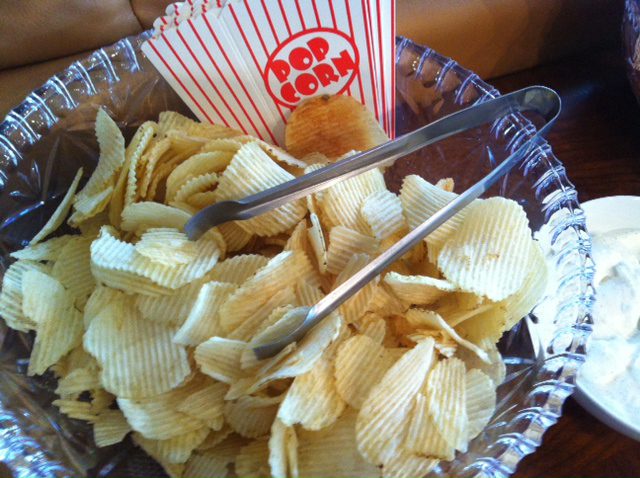 My friend Cris does that often though, and I keep meaning to knock off her idea. Next time! I did remember to throw some of those new popcorn bowls into the microwave before the movie started, and everybody went downtown on that. 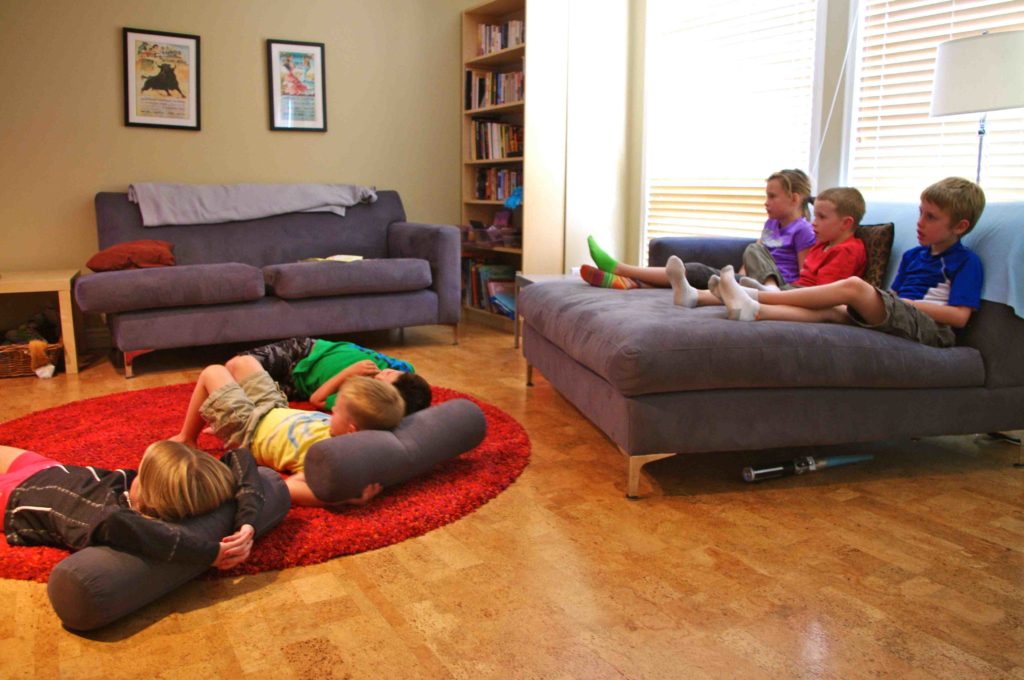 You can never have enough pillows.

Finally, it was time for the big event. Some kids chill-axed on the double lounger while others snagged prime floor seating. They all thought it was pretty cool to watch it on an old-school TV. 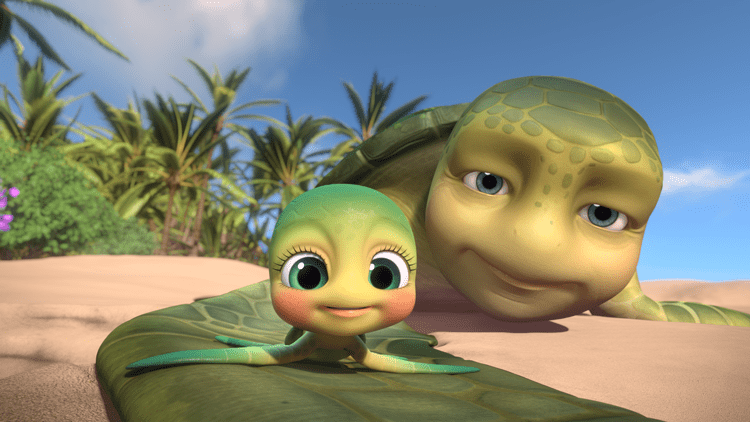 It doesn’t matter if you’ve seen A Turtle’s Tale first. It’s easy to figure out there’s two main turtle characters and these dudes, Sammy and Ray, are still friends. Shockingly, they  become trapped in an underwater aquarium while their grandkids, Ricky and Ella are floundering about in the ocean. Sammy and Ray’s need to protect their grandkids, but first have to make it past some shady characters, and work together in order to escape. 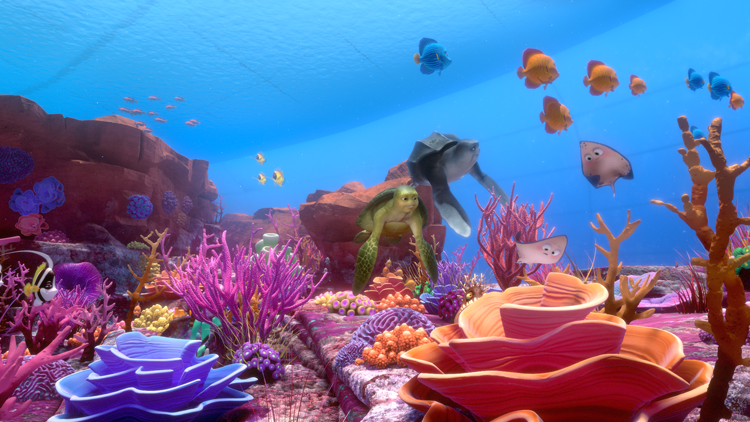 I would hate to be the graphics person for this movie. Or any movie, really.

All the girls loved Ella (the little girl turtle), while the boys were partial to the hammerhead (who bares a striking to resemblance to Kate Hudson – must be the eyes).  Some of the kids granted me interviews afterwards, but others were too busy whooping it up at the after-party. (Chocolate ice cream might have been served right before bedtime.) I did, however, manage a quick convo with the hostess.

Me: So, squirt, was Ella your only favourite character?

Eve: I liked the shark too, because he never gave up and believed in himself.

Me: Wow, I wasn’t expecting that! Would you say that was the main message of the movie?

Eve:  C’mon, mom! It’s not like this is a bible story. (Rolls eyes and storms back to the brat pack.)

Fortunately the other parents swooped in for pick up at this point, and we avoided further drama, sadly so common among A-listers these days.

All in all, the movie rocked, the kiddies loved it, and this parent was partial to the soundtrack. But don’t take my word for it, check out the trailer with your tykes. Better yet, watch the whole thing and let me know what you think.

Have you ever hosted a movie night for the ankle biters? What are your favourite family movies?

Disclosure: I am participating in A Turtle’s Tale 2 – Sammy Escapes From Paradise Blogger Campaign by Mom Central Canada. I received compensation as a thank you for participating and for sharing my honest opinion. As always, my opinions on this blog are my own.