Skip to content
Home/Sidney, BC: All the best things to do here
Previous Next

Sidney, BC: All the best things to do here

If ever there was an island made for families and outdoor enthusiasts, Vancouver Island would be it. There’s plenty of places to explore – Parksville is tops for families, Victoria, the capital, charms absolutely everyone and Tofino is a surfer’s paradise. But quite possibly my favourite spot is Sidney, BC. I bet even Meghan and Harry have been charmed by this seaside town. Their 2019-2020 Canadian enclave on Patricia Bay is a mere 10 minute drive away.

My favourite spot for seafood in all of B.C. is found at Sidney’s Beacon Wharf. (Photo credit: Town of Sidney)

I’ve been coming to Sidney ever since I was four-years-old. I vaguely remember the original trek – moving cousins out to this BC town when I was four-years-old. Since then, I’ve been back and forth too many times to count. And if you’ve ever taken the ferry from Vancouver to Victoria, you’ve likely visited too, as Sidney is where the ferry terminal is, plus it’s the closest town to the airport.

Officially known as Sidney-by-the-Sea, this B.C. gem is a charming town with a population just over 10,000, anchoring the Salish Sea (more on that below). Here, you’ll rack up plenty of outdoor time without even trying. There are pebbly beaches to comb, green spaces to explore and lovely trails for wandering in Sidney BC.

Besides marine life, Sidney is well placed for anyone interested in going sea kayaking, whale watching and even the famed Butchart Gardens is nearby. You can visit all year round as it has some of Canada’s mildest weather. I love visiting in late winter and early springs – whenever I’m in need of a good dose of green and fresh seafood. 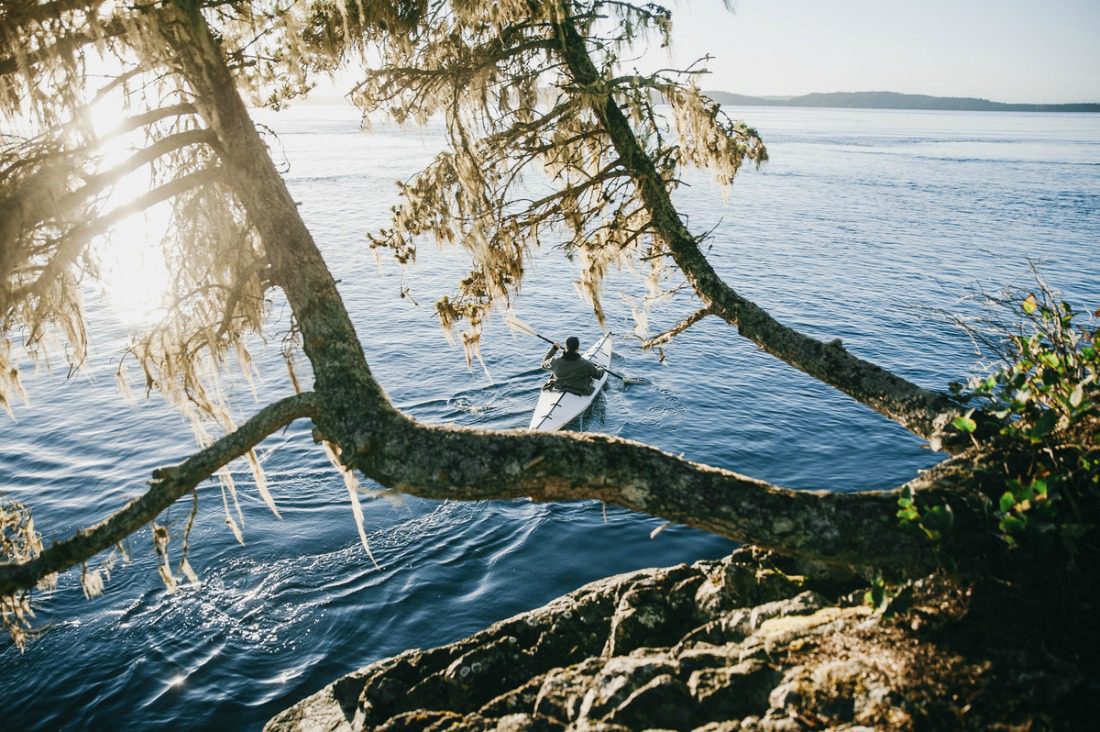 Sidney is an ideal outpost for water lovers. (Photo credit: Destination BC)

You may be confused with references to the Salish Sea when researching things to do in Sidney or even Vancouver Island. This body of water refers to the coastal waters off the south coast of British Columbia.

Basically, the Salish Sea refers to these bodies of water: the Strait of Georgia, the Strait of Juan de Fuca, and Puget Sound. These waterways were officially designated the Salish Sea in 2010. Some folks, however, don’t love this designation on the basis that this waterway is truly a series of interconnected straits, sounds and inlets and isn’t technically a sea by definition.

I’m in favour of the name change. And FYI the Coast Salish are the indigenous Peoples living in southwest BC and northwest Washington along the Salish Sea.

Of course, shopping is one of my favourite things to do and Sidney, B.C. has quite a few quaint stores and coffee shops. (More on their charming bookshops below). There’s loads of public art – both outdoors inside the many cafes. Sidney even has its own waterfront sculpture walk.

It’s such a lovely place to stroll and browse, especially since the speed limit in town has been reduced to 30 km. All the hustle and bustle of city life seems light years away.

One surprising thing about Sidney B.C. is the number of bookstores it sports. Saunter along Beacon Avenue, the town’s main drag, and discover why Sidney is known as Canada’s Booktown.

These bookstores have a wide range of topics. There’s a children’s bookshop, one that’s haunted, some even have antiques in them. They’re all very kitschy and lovely.

Lots of excursions from fishing to marine life watching depart from Sidney.

Things to do in Sidney, B.C.

What’s great about Sidney, B.C. is that it offers plenty of diversions for all ages. Pretty much everything in Sidney is within easy walking distance, and the town is an affordable basecamp for families. You could easily stay here instead of B.C.’s capital city of Victoria and still get to see all the main attractions.

Since this unpretentious town anchors the sea, sea kayaking is one of the most popular things to do.  Blue Dog Kayaking offers rentals, lessons and tours, as does A Paddle in the Park and Sidney Whale Watching. There’s plenty of SUP to rent from the Sidney Marina, too. 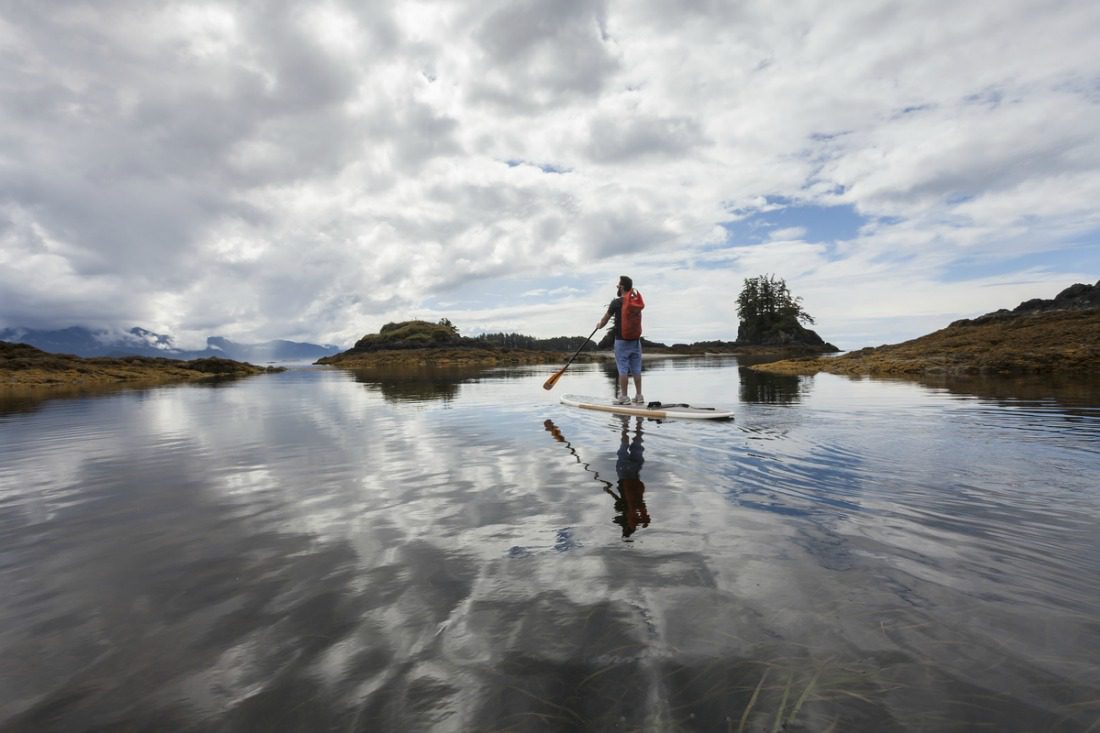 If you’ve got the stamina, there’s lots of little islands to paddle to from Sidney. (Photo credit: Destination BC)

Tulista Park is a lovely little spot for wee ones. (Photo credit: Town of Sidney)

If you’ve got kids, there are three main playgrounds you could hit up in Sidney. There’s Melissa Playground, but better I think is Tulista Park. It’s got a a skateboard park, sand volleyball, boat launch, picnic facilities and there’s plenty of free parking.

If views are what you’re after, head to the waterfront for Beacon Park. Here, you’ll find public art, more skateboard and picnic areas, a fenced playground area, and lovely walkways for strolling along the sea. If it’s a hot day, be sure to visit the lovely little splash pad at Iroquois Park.

Along the waterfront is a well developed trail system. (Photo credit: Destination BC)

For spa lovers, Haven Spa and Salon situated inside Sidney Pier Hotel and Spa is where you’ll want to decompress. I think you can tell a lot about a spa by the products they carry, and you can’t go wrong with the Eminence Organic Skin Care and Aveda Hair Care lines they feature. Haven offers all the top treatments – facials, massage, wraps, scrubs, mani-pedi, waxing and threading to choose from.

If you’re looking for things to do out of town, The Butchart Gardens is an obvious one. Lesser known, but equally as intriguing for children is Butterfly Gardens.

Less than a 20-minute drive away from Sidney, this tranquil indoor garden contains lush foliage and beautiful blooms. It’s also home to many rescued tropical animals including flamingos, tortoises and even poison dart frogs!

The big draw, however, are the thousands of free flying butterflies nibbling on fruit trees such as papaya and pineapple. Don’t be surprised if they like you so much they decide to land on you!

How can kids not calm down when being entranced by hundreds of butterflies?

Sidney is right in the hear of the action for orca viewing. (Photo credit: Destination BC)

In addition to orcas, you may see grey whales, humpback and minke whales, too. Plus there’s loads of other marine life including too many sea lion colonies to count.

You’re sure to spot a few colonies of sea lions and porpoises on your whale watching tours. (Photo credit: Destination BC)

Sidney Whale Watching begins tours in March and wrap up at the end of October. They boast a 95% success rate for sighting whales aboard their custom built 30 ft boats – built specifically for marine life viewing. And if you don’t spot a whale, they’ll let you take another tour free of charge.

You’ll be hooked upon entry at the Shaw Centre for the Salish Sea. Access to this, the only aquarium in Sidney B.C., requires a journey in a tricked out elevator meant to invoke a submarine being submerged into the sea.

The floor rumbles, lights flash and all the bells and whistles go off until you’ve arrived at sea level AKA the basement. Devoted to discovering the Salish Sea, this aquarium offers more than the usual tanks and fish feeding frenzy. Kids interact with the ocean through a number of different stations.

See how sharp a killer whale’s teeth are, hold the rib of a grey whale or peer into a microscope to watch minuscule marine life. Especially exciting is the touch tank where everyone can get their hands wet petting jewel-toned starfish, spotted sea slugs and hypnotic anemones.

Kids go crazy for these touch tanks. Anything to spread their germs around, right?

Want to cook your own seafood? Pop into Satellite Fish Co., the main fish market, at the end of the pier in Sidney. This is the best spot to buy fresh off the boat B.C. fish and shellfish.

Satellite Fish Co really knows how to pack for travel, too. One of their fishmongers told me that a Chinese client returned home and their crab was still alive after 15 hours of travel. I rarely return home without some fresh crab, and you shouldn’t either. 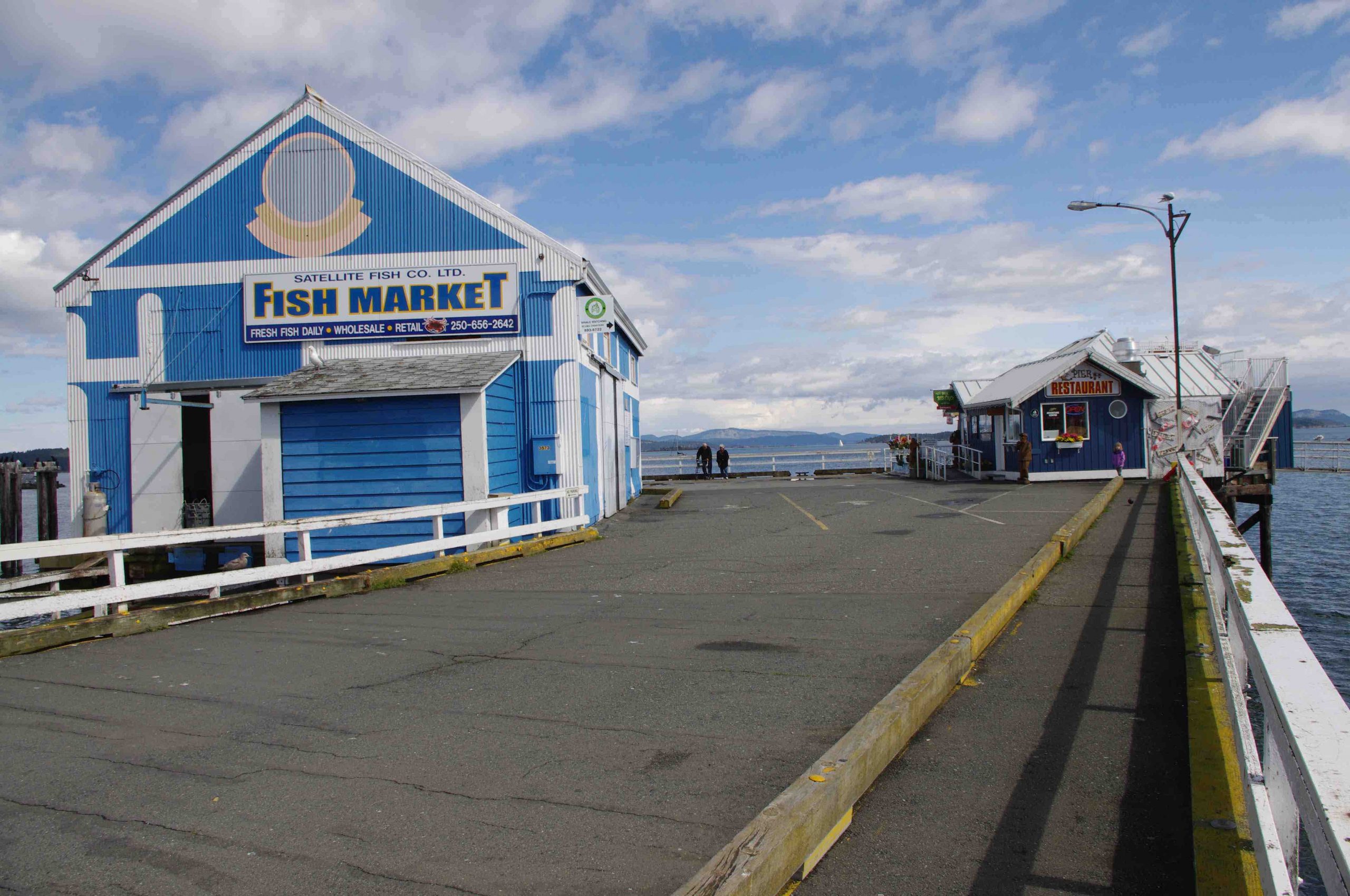 Quite possibly my favourite fish market in the world.

Cedarwood Inn and Suites holds a special place in my heart. Every single time I’ve visited Sidney I’ve stayed at this motel. Pretty much every Easter I had as a kid growning up was spent here, searching for eggs in their lovely green space.

It can be hard to find reasonably priced waterfront accommodation, but you’ll find it at Cedarwood Inn. From a quick glance, it looks like a motel, but there’s more to it than that. It’s got a range of accommodation from motel-style rooms to kitschy cabins overlooking a central garden, and the new addition boasts condo-like suites with jet tubs, fireplaces and balconies overlooking the ocean.

Be sure to request a room with a kitchenette if you fancy preparing a seafood feast with your bounty bought from the docks. There’s also a communal BBQ and picnic tables outside. Cedarwood Inn is less than a 10 minute walk into downtown Sidney and is right across the street from the pebbly beach.

Have you ever been to Sidney or Vancouver Island? What are your favourite haunts?

10 Awesome things to do on Vancouver Island

Best things to do in Vancouver with kids