Alberta is home to 6 UNESCO World Heritage Sites, and most of them are located right in Southern Alberta. We’ve got all the info on what to expect at these stunning sites, plus tips on how to have effortless day trips to these world renowned destinations.

The majority of UNESCO World Heritage Sites in Alberta are situated less than a two hour drive from the Southern Alberta city of Lethbridge.

These sites are recognized because they showcase the diversity of our planet thanks to their historical value and/or spectacular geological formations. Each site is spectacular in its own right and is as significant as the great pyramids of Egypt, Machu Picchu or the Grand Canyon.

Here’s a look at what to expect when visiting each of the 4 Southern Alberta UNESCO World Heritage Sites.

Hiking through the hoodoos at Writing on Stone Provincial Park can’t be missed!

An easy day trip from Lethbridge, this spot is special for many reasons. For many Indigenous Blackfoot People, it’s a sacred, cultural destination, as their ancestors roamed throughout this region for thousands of years.

Take a hike along the Hoodoo Trail, a self-guided interpretive walk (2.2 km one way) and you’ll come across rock carvings and pictographs etched into the sandstone cliffs. These cliffs and coulees were formed 85-million-years ago, after the melt from the last ice age eroded the soft sandstone rocks exposed in the valley.

The Milk River cuts through the Park, and it’s a one of those warm rivers you’ll regret not taking a swim in. Pack your bathing suit, hiking boots and picnic to make the most out of your day.

On the water you can explore this gorgeous UNESCO site from an entirely different perspective.

Dive deeper into the history of this landscape on guided tours and evening interpretive programs. More information can be found here or at the Visitor’s Centre, open from mid-May until mid-October.

From Lethbridge it’s approximately an hour and 20 minute drive to Writing on Stone Provincial Park Áísínai’pi.

Kids especially love roaming over the sandstone hoodoos at Writing on Stone Áísínai’pi.

As you might have guessed from the name, bison were driven off the cliffs by Indigenous hunters for nearly 6,000 years. This is one of the world’s oldest and best preserved buffalo jumps, and one with significant archaeological deposits.

There’s many levels to explore inside the Interpretive Centre, dramatically embedded within the sandstone cliffs. Inside, you’ll find artifacts dating back 12,000 years, plus in-depth exhibits that delve into not only the geography of the region, but life for the early Plains Peoples pre-contact. Visitors can learn about the anatomy of the hunt and how traditional hunting and culture changed with the arrival of Europeans.

Immediately you can feel that Head-Smashed-In Buffalo Jump is a sacred spot.

From the centre, it’s about a 3-minute walk to the ancient hunting ground. The landscape is stunning and beneath the cliff there’s a 1.2 km hiking trail. You’ll want to budget at least an hour and half to explore this historic heritage site which is open all year round, but several hours is better.

From Lethbridge it’s a 45-drive to Head-Smashed-In Buffalo Jump. If you’re headed back to Calgary, it’ll take you just under 2 hours.

A sign of our times at Head-Smashed-In Buffalo Jump.

One of the most family-friendly destinations in Alberta, few places in the world have the sheer number dinosaur fossils and the diversity of dino species as Dinosaur Provincial Park does.

Back in the day (let’s call it 75-million-years ago), Alberta was a sub-tropical paradise with lush forests along the coastal plains. Turns out, this was the ideal climate for the preservation of dinosaur bones into fossils.

Kids have a sense of unlimited freedom when exploring this vast park.

What’s really cool about exploring this site is what you might think is rock, is often not. There’s a standing joke that in Dinosaur Provincial Park you can’t throw a stone without hitting a dinosaur bone – and the stone you throw is likely one of those bones.

If fossil hunting is what you’re after, tag along with a palaeontology expert on guided tours. And if you’re into photography or simply want to up your Instagram game, take advantage of the golden Prairie light all the way into October.

The Visitor’s Centre is open until the end of October and by appointment only from November until April. From Lethbridge, it’s approximately 2 hours to reach Dinosaur Provincial Park by car. From Calgary you’re looking at 2.5 hours of drive time. 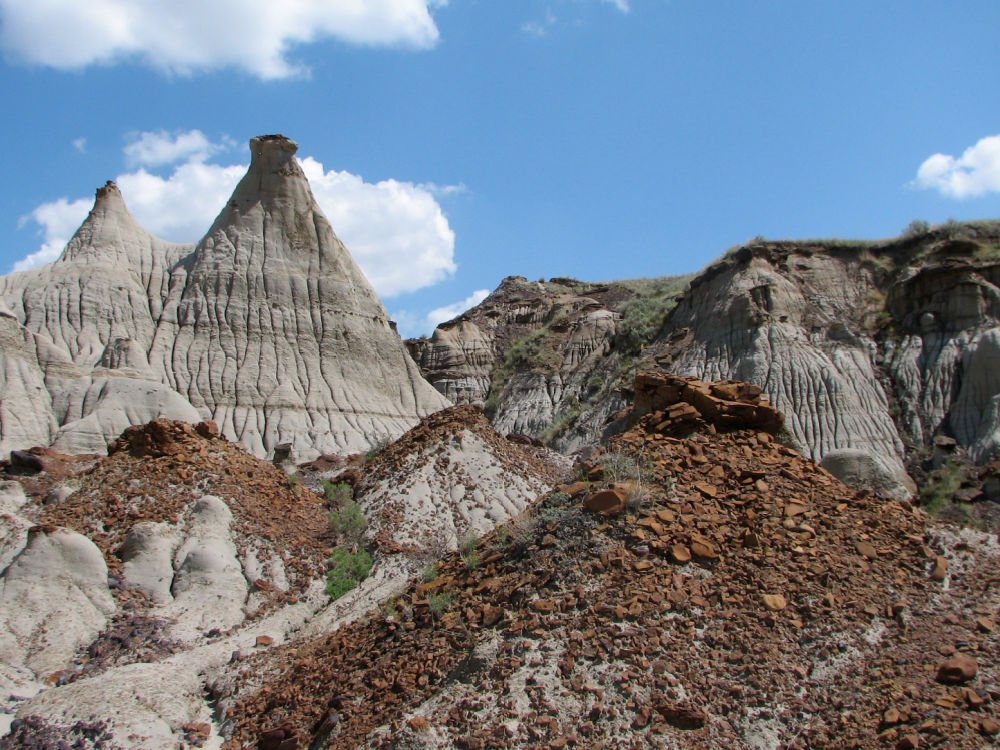 You’d almost think you were on another planet. The landscape at Dinosaur Provincial Park is so otherworldly.

Situated where the Prairies meet the Rockies, Waterton is not only a UNESCO World Heritage Site, it’s also a designated United Nations Biosphere Reserve. Adding to its international pedigree, Waterton is one of the world’s first International Peace Parks, twinned with Glacier National Park in the USA.

But when I think of Waterton, I see it as an under-the-radar gem in Canada’s Park system, possibly because it is only fully open from May until Thanksgiving. Everybody knows about Banff, but few people realize Waterton sports just as many pretty peaks – many of which are less well travelled.

Don’t forget about Waterton in winter! Most of its hotels are closed, but you can spend the night in nearby Lethbridge.

When visiting Waterton on a day trip the top things to do are:

Other fun activities in Waterton are horseback riding and golfing on a stunning, affordable course.

From Lethbridge, Waterton is less than a 90-minute drive through the Crowsnest Pass.

Bear’s Hump is one of the highest reward ratio hikes you’ll find in the Canadian Rockies.

Where to stay in Lethbridge

By basing yourself in Lethbridge, it’s super convenient to hit up all 4 of Southern Alberta’s UNESCO World Heritage Sites. We spent the night at Wingate by Wyndham. From this hotel it’s quite easy to hop onto the highway towards Head-Smashed-In Buffalo Jump or out to Waterton and Writing on Stone.

But we weren’t the only ones staying here! In the hotel lobby, I ran into a friend from University who was staying there with his 2 kids. (And he has family living in town! Then again, so do I…) It’s an attractive spot because this Wingate is majorly affordable, and guest rooms come with a microwave and mini-fridge. There’s a nice pool, waterslide and a hot tub that I hit minutes after checking in. 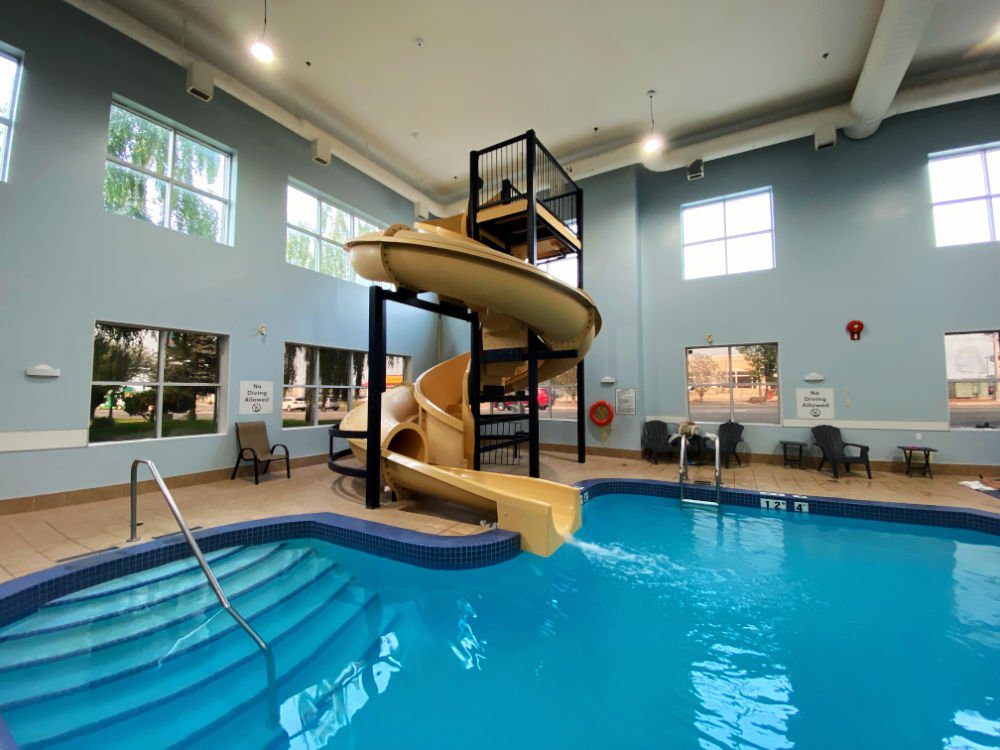 It’s bright and airy at this Wyndham indoor pool.

The best part? Every guest can tuck into a FREE, hot buffet breakfast. There’s eggs, bacon, fruit, hash browns and a cool pancake machine. Other Lethbridge accommodation options can be found here.

Have you ever visited a UNESCO World Heritage Site? Which ones are your favourite?

BOOKMARK THESE SITES FOR LATER

Keep this info close at hand by saving the image above to Pinterest.

What to do in Waterton Lakes National Park

Best things to do in Lethbridge

Where to eat in Lethbridge